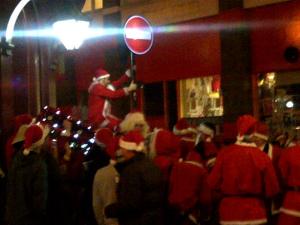 As I found myself flung amongst flash-mob Santas in Soho (London) recently, it reminded me of the distance that writers keep from the world while being fully immersed in it, fascinated by it, and dependent on it.

I was passing through an area of the capital that I hadn’t found myself in for some time – and the memories winked and flickered at me from the jolly cobbled puddles, the cheeky angel lights and the dark side-streets of Christmas parties past.

The flash-mob Santas were variously dressed in shorts, stockings, beards and boots, and took pride in their numbers – eager to embrace, joke, laugh and drag all and sundry into their hedonistic and inclusive partying.

Except I, huddled in my hood and dodging the throng, preferred to absorb the vibe from a safe distance, happier to watch and comment on the fun than be a part of it. The Writer’s Existence, maybe? Pressing one’s nose against the shop window of life rather than entering in to try the treasured outfit on?